In this article we will see how to exploit the JAX-WS Handlers and the Liferay Audit Framework with the aim of auditing SOAP messages (request and response) of our custom SOAP Web Services. Finally I will leave you a nice bonus.

As for the in-depth information on Liferay Audit, I suggest you download the Liferay Boot Camp 2019 material held on May 16th in Rome and organized by SMC. In addition to the #SecurityAudit theme, many other interesting topics have been discussed.

All the code shown in this article is available on the GitHub repository liferay-72-soap-client-examples and tested on Liferay 7.2 GA1.

We have the case of having a SOAP service on which we need to do an audit trail, we need to track SOAP messages (request and response). How to realize this need?

Everything you need to reach the goal is already available inside Liferay’s tool kit. The tools we are going to use are:

2. How to implement the JAX-WS Handler

We should therefore develop a JAX-WS Handler of type Protocol Handler because the processed level is the protocol level, in this case SOAP.

We are in an OSGi context, therefore the handler will be implemented as OSGi Component (Declarative Services Specification) and will use the Liferay Audit API with the aim of capturing and sending SOAP messages of in bound and out bound to the system of audit.

Audit Log Handler is the name of the OSGi component that implements a JAX-WS Handler and in particular a SOAPHandler.

Of the code shown, pay attention to the two properties of the component that are highlighted, service and property. The first property specifies the service interface, in this case javax.xml.ws.handler.Handler, the second sets a key value pair that will then be used (via OSGi Filter) by the Liferay Extender to activate the handler.

It is advisable to use a key for OSGi Filter that is self explanatory and I believe that audit.log.jax.ws.handler.filters=true is.

The management of the SOAP message (including the fault one) is managed by the private _doHandleMessage (context) method called by the two public methods of the Handler interface:

The following code shows the implementation of the _doHandleMessage(SOAPMessageContext context) method which in particular:

The information of interest to us drawn from the audit system is:

The implementation of this JAX-WS Handler is complete and the next step will be the configuration whose application will hook the handler to our SOAP service.

3. Configuration of the JAX-WS Handler for the SOAP service

If we deployed the Audit Log Handler on our Liferay instance and tried to invoke the SOAP service (for example via SOAP UI), we would not get the expected result. For what reason?

The motivation is written at the beginning of the previous paragraph, the Liferay Extender must be informed about the JAX-WS Handlers that must be activated for the specific SOAP endpoint. How do you do this configuration operation?

The configuration can be performed through the control panel: System Settings -> Web API -> SOAP Extenders, from here access the affected endpoint and specify the filter (audit.log.jax.ws.handler.filters=true) to internal JAX-WS Handler Filters configuration. The following figures will make the idea better.

The affected endpoint, in this case /custom-user, corresponds to the SOAP Custom User Service WS service whose implementation is available within the custom-users-ws module.

Before proceeding with the configuration you should make sure that the following modules (which I remember are available on the GitHub liferay-72-soap-client-examples repository) have been installed: 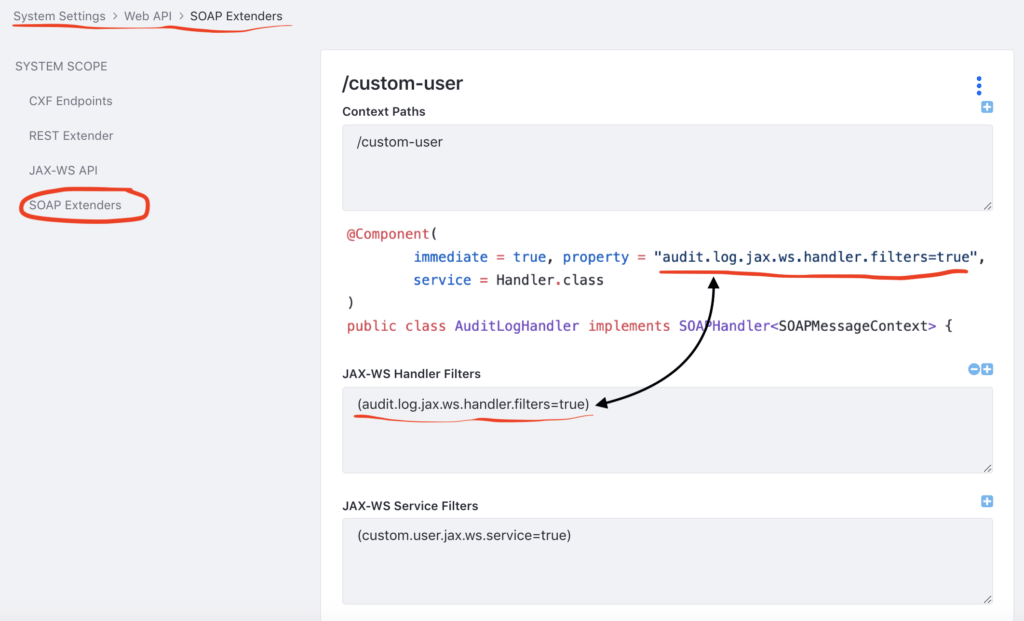 A small note. The custom-users-ws module containing the SOAP service subjected to the audit was set up for automatic configuration but at the moment does not seem to work with Liferay 7.2 GA1 (see LPS-101642). This is why we must proceed with manual configuration.

4. How to test the JAX-WS Handler Audit Log Handler

Before proceeding with the configuration you should make sure that the following modules (which I remember are available on the GitHub liferay-72-soap-client-examples repository) have been installed:

To verify the correct operation of the Audit Log Handler it is sufficient to call the SOAP Custom User Service WS service through the SOAP UI tool or other equivalent (such as cURL or HTTPie).

The following two figures show two SOAP requests (of which one is a fault) of the Custom User Service WS service and in particular for the getUsersByTags() operation. This operation returns system users who have a specific tag.

Very good 🙂 Has our JAX-WS Audit Log Handler component done its job? Let’s connect to the Liferay database and make a query like the one shown below and that acts on the AUDIT_AUDITEVENT table.

The result of the query is shown in the following figure from which it is possible to note the two records for the two SOAP request and response messages that are correlated through the value of the classPK attribute that represents the correlationId. 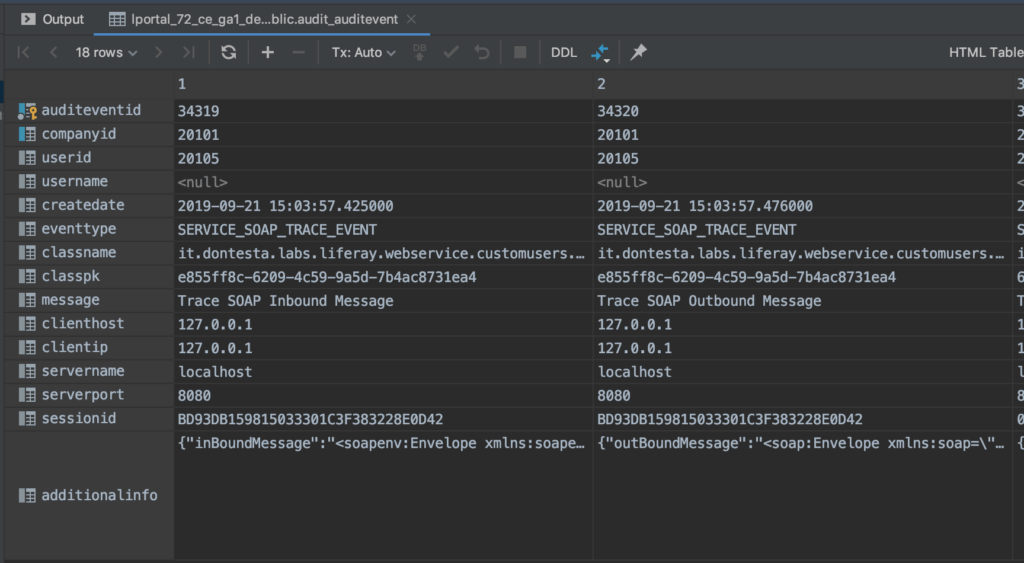 The content of the additionlInfo attribute of the AUDIT_AUDITEVENT table is a JSON whose example content is shown below.

At the beginning of the article I had written a bonus. What is it? I wanted to leave you an additional JAX-WS Handler that you could play with. You will find the code inside the repository. Good continuation and fun. Let me know your impressions 😉